I’m not sure how many of you have seen this Netflix series. If you haven’t, you should. It’s now on season 2. It’s one of those shows that while there is a lot of disturbing material, it also generates many eye opening opportunities for parents, the school, and the students.

The other day, while having lunch there were a bunch of teenage boys who were boisterous to the point that you could actually hear (albeit, painfully) their conversation.

Their topics varied from girls to teachers. Fair enough topics to discuss for their age. You know how teenage boys are. They are loud. Period. Bragging is second nature to them in order to prove their machismo! Proving that their genitals rule the world, many of them break the silence of a room by sharing the latest conquest with the power of the penis! (And that’s as graphic as I will get.)

Testosterone levels are highest during puberty. Which explains the higher sex drive and rough edges of the male species.

In the series “13 Reasons Why”, while the death of Hannah last summer was multifaceted, it nevertheless centered on the fragility of teens living in a world where the Internet has changed the paradigm on how to deal with human beings.

It also dealt with teens living in different conditions where immediate gratification and approval from friends, family dynamics and how those who’re supposed to protect the best interests of the youth are expected.

In an era where bullying is an acceptable “norm” and accountability is fragile, abuse is extended to the weak, and no one is willing to speak the truth, “13 Reasons Why” encompasses the situation of living and surviving in the 21st century.

The “jocks” who move around campus with prize girls willing to trade sex in exchange for popularity has impacted on how parents who are busy with their careers while balancing on how to rear their children need to deal with sex, drugs and bullying in the school premises.

And this is not a alarmist call. It’s a wake up call to reality. It’s been in existence since time immemorial.

Truth is, when I was in high school, I was bullied. Treated differently. And I know how it felt to be an outcast. To stand my ground. To be alone. But not everyone survives the hurt. Decades later, I still recall the pain. All that I thought of was not vengeance but how to make the pain go away and be strong enough to deal with this kind of people in my life.

Our children are the future of the country. Raising them well as model citizens with appropriate morals is our responsibility. 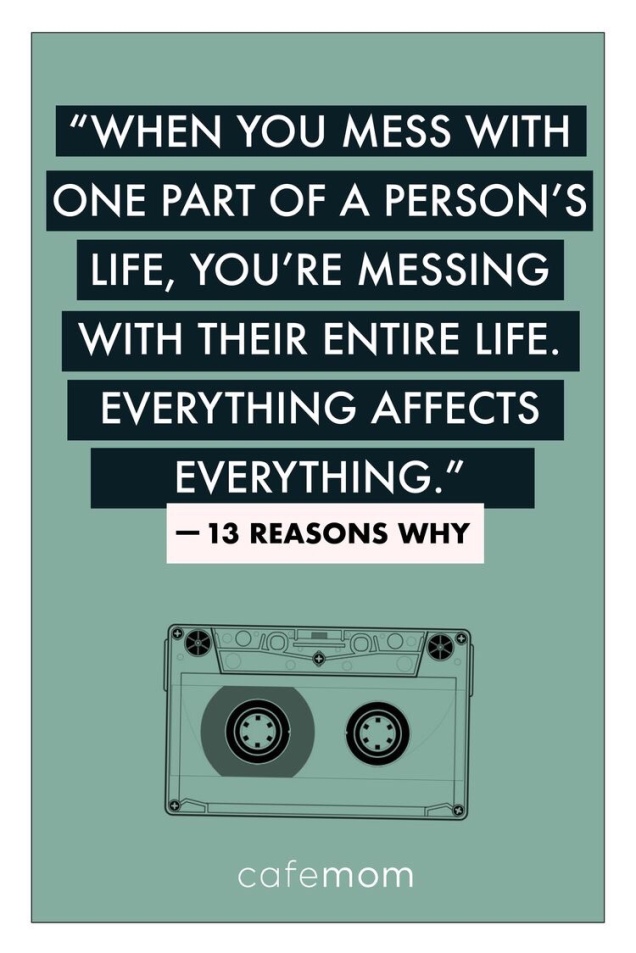 From someone who has gone through the throngs or being bullied, to surviving it, deep within the scars remain. The scars are there, not because I have 13 Reasons Why I will hurt myself, but to make it serve as a million reasons why I need to look at over and over again as a reminder that bullying is not and can never be acceptable in any form.