Yes. There’s an art to this. More brownie points are earned the further you stuff your nose up the crack as possible. There. I’ve said what needs to be said.

Entitlement is a delusion built on self-centredness and laziness.

They’re essentially the flies on top of the carabao. Most, if not all of them, are basically incompetent. They have no purpose in life except to exist like the fly. What’s the purpose of the fly? None. Without the fly, there would be no story to tell. No comparison to make.

Entitled people are the reason for the rise of the incompetent (check out my blog the day before this).  They THINK they should be given the red carpet treatment. The only reason – because.

Despite their average IQs, they land posts in formidable positions or places, not because they deserve to or because they have rightfully earned it. Rather, they just know how the right connections and family tree, which buttons to push and how to play the game.  The major advantage they have in the game of life is that they are survivors.  And they’ve mastered the art of manipulation.

Lies are made to look like truths because the master is as clueless as an empty coconut.  They are adept at the art of propaganda and strategising on how to use the gullibility of the master to get what they want.  They are ambitious but ungrateful people.  Hypocrisy is the mantra to their daily existence.  They don’t like being told what to do or that they are wrong.  Self opinionated and evil in thoughts, their being inconsiderate is because they have no conscience.  And they enjoy the spotlight.

Entitled people lack integrity because their thoughts and actions are based on personal gains rather than on values.

The entitled feel that what you give them is never enough.  Even if you’ve given them everything they deserve.  One of the consequences of entitlement is that people who have contributed nothing to society feel that society owe them something, apparently just for being nice enough to grace us with their presence.

The other day, in the midst of all the silence at the library of the country club where I sometimes do some writing, a young man is overheard breaking that silence.  He took a call from his mom. I thought that he was just going to chit chat for a bit but after 5 minutes of yakking, I turned around and saw that he wasn’t planning to end that conversation anytime soon.  And that’s when I reminded him that there was supposed to be silence in the room, and could he please take the conversation elsewhere?  A few minutes passed, and there was silence again.  He stood up and approached me and sarcastically said, “sorry for the noise”.  Well, it was an apology, but you could tell that it was full of sarcasm.

Another one of those millennials feeling entitled.  Mind you, they are dependents of members of the club.  They don’t pay club dues or expenses.  And their membership is dependent on the status of their parents.  At 25 years old, they are not entitled to dependent privileges anymore.  And there are many like him.  Regardless of age. They justify their entitlement. Maybe the parents raised them that way.  Maybe society has praised them to the point where they feel the world owes them more than what they can churn.  Maybe because we tolerate the entitled.

We need to break down this class of entitled people.  Like the fly in the story, they serve no purpose in life. And if you’re one of the entitled people reading this post, there’s something wrong with your character if opportunity controls your loyalty.

We either live simply or simply live.

Simply living for the sake of surviving has no true goal except existence. Simply living is a survival mode for those of us who go through stressful lives worrying about tomorrow yet being stuck living in the past. In order to live a life with minimal anxiety, we need to live simply. And here are 10 tips on living a simple life:

If you had one thing that’s most important to you, what would it be?

2. Eliminate toxic people from your life

Parasites and vultures are not the kind of people you want to surround yourself with. They take advantage of you and are there only during the times when you’re at the peak of your career. When you’re at your lowest, you’re carcass to them.

3. Give yourself a day

We all need a break. No matter how life treats you, there’s got to be a time for yourself – me time. Take that time to recharge, rethink and rebuild your strength.

4. Make a budget and pay off a debt

Don’t bury yourself in “wants”. Pay in cash when you need to. Drowning yourself in debt leads to more anxiousness. Think about your future because the one who plans well during the summer of our lives, reaps best during the cold winter season.

Avoid overthinking the “what if’s” of our lives. There’s a lot to earn and learn in life. Take it in stride. One day at a time. Waiting for bad things to happen will just drive us crazy thinking of things that may never occur.

Don’t bring work home. Home is a special place to rest our weary bodies and mind. It’s called home for the very reason that it is our happy place. Keep it that way.

There are those that just live for the sake of rumor mongering. The less said, the less mistakes. There’s no use arguing when someone has made up his/her mind. When we need to provide an opinion, try to choose the right words as often as possible. That way, you’re able to drive the message across without hurting others in the process. Before saying anything, pause if you must.

8. Value your time and others

Avoid making too many appointments. Respecting the time of others is not only a professional act but respect as well. We complain so much when we’re kept waiting forever. But with ditch the same practice ourselves. Valuing others time is a reciprocal respect.

Yes. Those telenovelas have no purpose in life. Schedule your time being glued to the screen. Imagine if you watched 3hrs of TV a day, 7 days a week, that would be 84 hours a month. Tantamount to wasting more than 3 days a month or 36 days a year for what?!?! You could have done so much more with your life in 36 days! Imagine if you’ve routinely done this for the last 25 years! That’s 900 days or almost 2 1/2 years of life wasted staring at a box!

10. Get a physical activity going or a hobby

Boredom is deadly. An idle mind is the devil’s playground. We need to do something worthwhile with our lives. Staying physically fit allows us healthier living. As they say, health is wealth. And we spend less time (and money) with the doctor, if we only made a habit of staying healthy rather than just being alive. 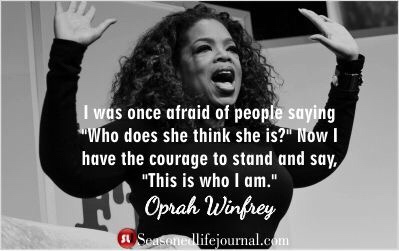 Born in an isolated farm in Kosciusko, Mississippi in 1954, this iconic woman had a difficult childhood. The story of her life is an inspiration of resilience and strength.

Born to unmarried parents, she was shuffled to a ghetto in Milwaukee at 6 years old and then lived with her father in Nashville at 12. The poor, urban lifestyle exposed her to repeated sexual abuse by men that others in her family trusted.

Today, Oprah, in spite of her difficult childhood is one of the wealthiest women in the US and the highest paid entertainer worldwide. But her story is not about just working her way to the top. Along the climb, this woman is substance has reached out to countless nameless people who needed help. Her generous contributions to charitable institutions and organizations has endeared her to people and has served as an icon for hope in spite of life’s challenges.

Philanthropy is not everyone’s cup of tea. And while there are philanthropists in our midst, not everyone starts from rock bottom and has had changing moments in their lives. Those changing moments provide one the true impetus and opportunity to extend help to our fellow men when we can. While helping our neighbors is not an obligatory act, the act of sharing the largesse for the greater good is a defining moment when we extend help to those in need (in any little way we can). After all, it’s been said that “to whom more is given, more is expected”.

Charity does not have to be announced with all pomp and fanfare. The daily kindness we share in our own little way to people who need that helping hand goes a long way.

One day at a time. One step at a time. One moment at a time. Together, we can all make those small differences a large matter. Because this is who we are. People who are strong in spite of the odds.

“What does not break us make us stronger”

No one goes through life without trials. Our burdens may vary between one another, but they’re burdens nevertheless. While some may be going through tough financial times, others are enduring health issues or emotional and mental crisis. No matter how small or big the problem is, everyone carries his or her own cross in life.

Do we learn to let go and walk away or hang on for dear life?

I remember my friend would always quip during story telling by saying, “but wait, there’s more”! I initially found it funny, but today I use that parody by alluding to letting go and finding the courage to fight for what is right and just.

Every trial is an opportunity at changing the game or situation. Do we fight on or just quit? Imagine if we walked away from all of life’s issues and challenges, where would we end up? We’d have no stories to tell or write about. Life would be so sad that no one could hardly remember who you are and why you existed. The best part of life isn’t just the happy moments I talk about in my stories. It’s about the small victories we take, one day at a time, and encouraging one person at a time with this courage. One voice today may not be loud enough but when you’re able to make all voices heard, even the king in the palace will hear his people’s cries.

That’s the kind of courage we need to have. To let go of fear. To have courage to find the strength to move mountains and yes, even if we cannot change the landscape today, my patience and resilience at life will make me a better person.

God will not allow us to be tried beyond our strength. And we are all here for a purpose. That purpose of change and good should be the focus of our goal.

I know why I’m here.