After a few days in Rome, we took the train to Firenze (Florence).  The little less than 1 1/2 hours travel by high speed train went considerably smooth.

Florence is the cradle of the Renaissance. This urban chic city while small, is packed in history and arts at every turn.  The narrow cobbled-stone streets, marble basilicas, world-class art and museums as well as the quaint shops that pack the super tight roads of Firenze is as charming and adventurous as it gets.  It may not have the pomp of Rome, but it has the class, autocracy and grace of the Renaissance period embellished in its city.

Hotel Brunelleschi, right at the heart (or should I say centre) of Florence, was home for the next few days.  The hotel is equidistant from every place – from the Duomo to the Palazzo Vecchio.  While it is an old refurbished hotel, you’d be surprised at its interiors and what the hotel has to offer.  (The breakfast was standard all throughout the stay.) 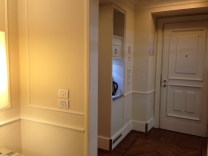 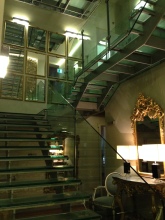 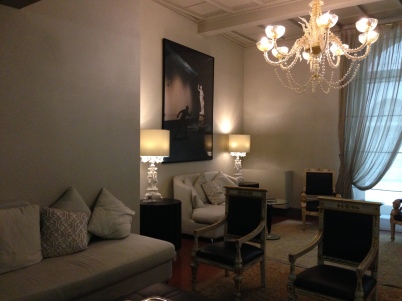 As you make your steps out of the hotel, the history of Firenze unfolds before your very eyes.  The Duomo, Palazzo Vecchio (with the exhausting climb to the tower), Ponte Vecchio, Biblioteca Nazionale Centrale, Piazza Santa Croce and the basilica where Michaelangelo is buried, to the Piazza della Repubblica for shopping…so many places, so little time (we should have stayed a day more)! 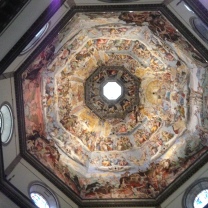 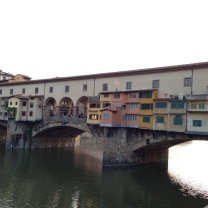 And yes, the gelato stores were right in front of our hotel. That alone was worth the stay!

On the third day we decided to hie off to Pisa.  From Firenze S.M. Novella station, make sure you take the direct train trip (and while there are several trains that go to Pisa almost every 30 minutes, you wouldn’t want to board the one that has to stop at several stations), and it should take you there in a little under an hour (the 11am train took us 50 minutes). It’s a touristy area (but we are, tourists after all).

Pisa and the Baptiste, the Cathedral and the Leaning Tower of Pisa.  The latter has an odd but interesting story which you will learn during the trip.  The tower was started in 1174 for the campanile cathedral and the baptistry. The engineer (Bonnano Pisano) had laid a marble foundation for this. It took them 176 years to complete this, but it was embarrassingly crooked. This was because the land where the marble foundation was soft because it had a lot of water. The foundation was only 10 feet deep. When the first floor of the tower was completed, it began to sink. The builders tried to save the tower by building the columns and arches on the south side one inch taller than the north side. By the time they got to the fourth floor, they were making the south side columns 2 inches higher than the north. Several decades (up to centuries) and several floors later, no matter what the engineers did, the tower still kept leaning.  And when it was finally completed two centuries later (1372), the tower was still leaning.

On our return from Pisa back to Florence, we decided to take a secondary trip from Florence to the Barberino Designer Outlets. There are multiple shuttle buses outside the Firenze station that leave almost every 2 hours.  Getting back from Pisa we were able to make it to the 4PM shuttle (with return at 8PM – and you know the sun is still shining here at that time).

After all, a true vacation should always involve some retail therapy!

But Florence isn’t all about sights and shops.  A gourmet Tuscan cuisine is worth the trip alone.

Two places I would highly recommend for Florentine dining.

The first is at Dei Frescobaldi Ristorante & Wine Bar.  It’s not a high end restaurant but great food as we dined on scallops for hors d’oeuvres, fettuccini in truffle for the first course and pigeon for the second course.

We splurged on the second restaurant.  I highly recommend the Michelin starred restaurant at the Four Seasons Hotel in Florence, called Il Palagio.  The food was the star of the show! While this may set you back a few bucks, the culinary delight was a vacation in itself! 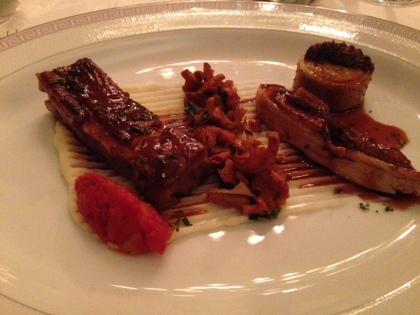 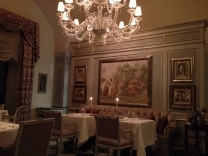 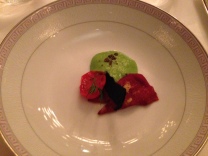 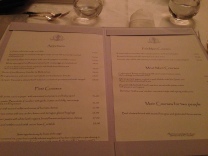 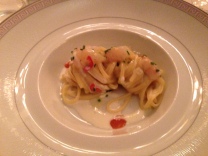 As the Italians would say, buon appettito!

La Dolce Vita is best experienced in Florence (Firenze), where even standing on a bridge in Arno will make you appreciate the beauty and dazzling spectacle of every shade of orange, pink, and amber.  The lifestyle here is laid back and is like the gradual turn of the clock, placing time in slow motion…to appreciate life and living it…