Perception is a way of regarding, understanding or interpreting something.

Opinion is a view or judgment formed about something, not necessarily based on fact or knowledge.

So, yes. This blog is about the recent PGH incident with a media person.

The perceptions of the media person were:

1. There was an immediate need for the  doctors at the ER to see the patient. Regardless of triage or protocols.

2. He is (was) an important person.  Which may have meant that when he tells the doctors at the ER that it’s an emergency, they should take his word for it.

His opinion, ergo, of the incident about the ER fracas was that the doctors were not paying attention and, as he would put it, should have attended to the “patient first”.

This is where cognitive bias is found.

A mistake in reasoning, evaluating, remembering or other cognitive process as a result of holding on to one’s beliefs and preferences regardless of contradictory information.

It is systematic. A deviation from what is the norm. Subjective social reality created from the perception of the input.

The putrid anger spewing from his mouth (as evidenced in the videos online) were, from any form of human standards, unacceptable.  Even, if for arguments sake, he wasn’t being attended to immediately, he still had no right to curse the medical staff.

If he felt that immediate attention should have been accorded the child, he should have done what was right – bring the child the the nearest hospital AFTER the accident.  Transporting the child 13 km from the scene of the accident in the midst of traffic, to a government hospital whose emergency room was undergoing renovation (and this was announced by the hospital all over media the past months), was irresponsibility from his end already.

He was just being an ass.  He thought he could get away with popularity.  At the same time, because it was his driver that hit the child, he thought he (and his driver) could scrimp on expenses by taking him to a premier government hospital.  The question now lies – what were the circumstances that led to the driver hitting the child?

There will always be people like him who feel entitled.  And they are not necessarily from his profession or his age group.  Lately, I’ve seen more and more of these “entitled” people from all walks of life and from extremes of ages.

Sadly, what is wrong is twisted to make it sound rationally correct. Keyboard warriors paid to undermine the truth by creating unsubstantiated opinions and perceptions are destroying the institution of our democracy.

We live in challenging times. The creation of bias is human. This month’s blog is about the truth unveiled. Let the dice be cast and fall where it should. 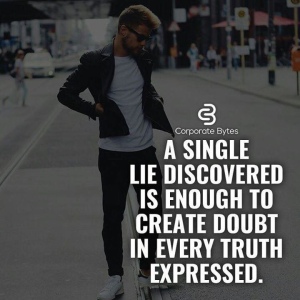