My post on “Credit Where Credit is Due”, drew inspiration from Thomas Sowell.  I know most (if not all) of my readers are unfamiliar with him.  I stumbled upon him at Pinterest and began reading up on many of his publications.  His biography entitled “A Personal Odyssey” published in 2002 is a recommended read.

Who is Thomas Sowell?

It is hard to imagine a more stupid or more dangerous way of making decisions than by putting those decisions in the hands of people who pay no price for being wrong.

Influential American economist and social theorist Thomas Sowell was born in 1930 in Gastonia, North Carolina but grew up in Harlem, New York.  Although Thomas showed signs of academic promise, his father who was a construction worker did not encourage him to pursue higher education. Thomas dropped out of high school, worked odd jobs, but his penchant for pursuing academic achievement saw him obtain a high school degree in an evening program.  After serving the marines, he entered Howard University and later moved to Harvard graduating Magna Cum Laude. He later earned his master’s from Columbia University and PhD from the University of Chicago. His mentor at the University of Chicago was the Nobel Prize winning conservative economist Milton Friedman.

His teaching career would take him to Rutgers, Howard, Cornell, Brandeis, and UCLA. Today, at 88 years old, he is currently a Rose and Milton Friedman Senior Fellow at the Hoover Institution at Stanford University in California.

A prolific scholar (he has written over 25 books), his earliest work Economics: Issues and Analysis was published in 1971. His latest work was published in 2007, entitled A Conflict of Visions.

His position with government and the private sector included the US Department of Labor, the Urban Institute, and the Hoover Institution.  In 1990, Sowell won the Francis Boyer Award from the American Enterprise Institute.  In 2002, he was awarded the National Humanities Medal for innovative scholarship and incorporated history, economics and political science.

Sowell tells things the way it is and the way it should be told.  Often times too real and painful for the onion-skinned, his opinions speak volumes of experience.

His political rants are spot on:

No one will really understand politics until they understand that politicians are not trying to solve our problems.  They are trying to solve their own – of which getting elected and re-elected are number one and number two.  Whatever is number three is far behind.

He has this to say when politics takes on a personal agenda:

Politics is the art of making your selfish desires seem like the national interest.

His thoughts on entitlement are point blank:

His views on education:

His thoughts on the current social situation:

On the relation of economy, taxes and the government:

I have never understood why it is “greed” to want to keep the money you’ve earned, but not greed to want to take somebody else’s money.

People who enjoy meetings should not be in charge of anything.

And harping at media bias:

If people in the media cannot decide whether they are in the business of reporting news or manufacturing propaganda, it is all the more important that the public understand that difference, and choose their news sources accordingly. 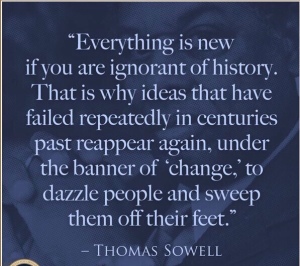