When former First Lady Imelda Romualdez Marcos was found guilty for graft on 7 counts last week, many people felt that despite half a century since committing the crime (three decades of the case in court), justice wasn’t blind.

Police Chief Oscar Albayalde went on the record on the air to say that “considering her age” the Philippine National Police shall not handcuff nor arrest her hurriedly. Minority house speaker Danilo Suarez didn’t feel that the crime Imelda did was a “big deal” and we ought to just poopah and “forgive and move on.”

For these two to provide these statements, it meant that they acknowledged her guilt. BUT, insinuate that we need to show kindness and compassion because she is 89 years old.

No rational moral thinking human being would even have thought the way Albayalde or Suarez thought. Clearly, people like these have biases and it’s just hard to pick the right words to describe their vapid line of thinking.

The bottom line is – the Sandiganbayan finds the accused, Imelda Romualdez Marcos – guilty in the 7 counts of graft. For all the suffering of the Filipinos because of the crimes of this family, I don’t understand how some people get the temerity to brush aside the guilt? How easy is it to tilt the balance of justice just because the accused are political friends with benefits with the incumbent rulers?

When these elderlies are still eligible, willing and able to run for public office, by golly, they should also be answerable and accountable to the office they occupy. In short, if there is graft and corruption committed by them during their term in office, they must pay for that crime! It is unjust that we look the other way just because of age. You cannot be willing to do one thing but not be accountable to answer for the misgovernance or corruption you committed.

The Philippine judicial system is slow enough that these people would have died before they got convicted. There is no moving on as long as the suffering and crimes are not reconciled. There is no forgiveness unless there are apologies.

Let’s call a spade a spade. 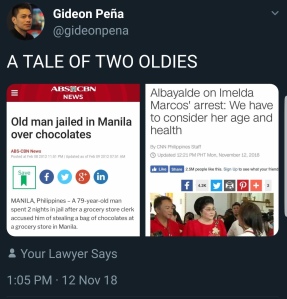 Justice cannot be selective. Justice must be tantamount to the crime committed. Regardless of people, power or personality.

Majority of our countrymen have limited funds for a decent meal, clothes to wear, shoes or slippers to walk kilometers to go to school, or a decent roof over their heads. When politicians deprive our countrymen of basic needs or even the sheer decency to live and survive day to day because they engage in shenanigans for personal gains, it is enraging that they are treated with kids gloves when they are found guilty of criminal acts.

If we stand for nothing, we fall for anything.

Remember: For fools to fall for the folly of the elderly, we deserve the injustice we get.