I have no political inclinations. Like many Filipinos, when it comes to political affiliations, I have no conflict of interest.

I do not like it when people call each other “dilawan” or “ka-DDS”.  We are Filipinos.  One nation.  Whether you are an oligarch or a pauper, whether you are a drug lord or a communist rebel, whether you are an OFW or a farmer in Benguet – the Philippines is our motherland. Patriotism should never be territorial.  Just because the president or other government officials hail from a province or region does not mean you have to die for them. No other agenda should be put on the forefront of politics except the greater good of the people.

When you want to help people, you tell them the truth.

When you want to help yourself, you tell them what they want to hear.

I am writing this for everyone, regardless of political stand, who use social media in the dissemination of information, to think and do a bit of research before they share. To share the full story and not pick up bits and pieces to fit an agenda. If there is nothing good to share or when you doubt on the information that you are sharing, DO NOT PRESS CLICK AND SHARE. Sharing wrong information is perpetuating evil.  It is wrong to think that it does no harm passing around twisted lies.  Peddling lies is being in connivance with the devil. The last I recall was that we are citizens of this nation and not a cult for some government officials.

I have friends and colleagues who have lost all critical thinking because of political affiliation.  And that makes me sad.  They were intelligent people who got washed away with the tide.  We need to respect each other’s political beliefs.  But a spade must be called a spade when it is.  Credit should be given where credit is due.

Of all ignorance, the ignorance of the educated is the most dangerous.  Not only are educated people more likely to have more influence, they are the last people to suspect that they don’t know what they are talking about when they go outside their narrow fields.

We all know that it takes more than the six (6) years of an administration to see the fruits of its labor.  There are projects of every administration that has either a sordid history laden with graft and corruption or one where we all look back and recognise the visionary in them.  Most of that, however, can only be appreciated after the term of the administration is over. It takes years to build infrastructure – skyways, road, airports, subways, etc.  The layers of governmental approval – from bidding to construction – is a logistic nightmare in itself.  By the time any sitting president will see his or her flagship projects, MANY OF THEM will be seen in the next administration.

I am writing to the people who use fake pictures to promote success when that success story never happened in our country.

I am not a fan of PNoy. He had his own lapses in governance.  And I can name many. But whatever credit is due him, let’s not subvert the incontrovertible truth of the achievements of the previous administration, particularly when it comes to infrastructure or disaster preparedness.  Every administration could have used the lessons the previous administrations had in building and rebuilding a country. There is no perfect leader.  There has been no one that has endeared the people. Using these lessons will chart us in more concrete directions.

Social media is being misused for the gullible plenty.  What the current administration can do is focus on short term goals – the economy.  That, my friends, is tangible success.

Since this is an era when many people are concerned about “fairness” and “social justice”, what is your ‘fair share’ of what someone else worked for?

Let the real infrastructure progress of the current administration be reflected when the projects have been completed.  When Boracay is finally open and cleared of all that stench and filth, then kudos to those responsible for the clean up drive.

The pressing issue is the economy hitting the shitty ceiling.  The major bravado of the current administration should be to work at what are tangible solutions to the economic woes of the country now.  When corruption and incompetence are in collusion with governance, we are all headed for a collision course with an economic meltdown because we were all focused on issues that were personal and formed background noise.

Let’s face it, you cannot turn your head away from issues hounding appointees who have been accused of corruption and stay silent about it.

You cannot look the other way with appointees who disappoint and drag the president down because of their feeling of entitlement and expect the public to love them. The president was elected to govern for the greater good of its people – friend or foe, rich or poor.  The allegiance of every Filipino is to its country.

One of the consequences of such notions as “entitlements” is that people who have contributed nothing to society feel that society owes them something, apparently just for being nice enough to grace us with their presence.

Let’s put some sensibility and civility back on the table.  There is no shame in recognising our faults and short comings.  Our disillusions and misplaced sense of allegiance.  Let us give credit to where credit is due.  And respect where respect should be.

Enough with peddling these lies, make believe stories and half-truths. Accountability is mandatory for all actions – no exceptions to the rule. If you have nothing better to say, or share, don’t. 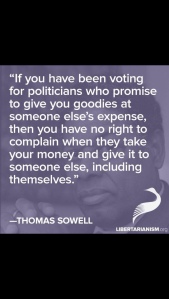 (All quotations are from the Politics of Thomas Sowell).