In my first year in college, one of our subject was Logic.  I recall my professor, Mrs. Estrella de Leon passionately going through the essentials of simple logic.

Logic after all is fundamental to how humans communicate.  Public debates, ways of reasoning are daily exercises that are shaped by the principles of logic. Mathematical background and symbolic methods are not prerequisites to symbolic logic.  All that is required is the brain in between your two ears in order to appreciate Argument and Critical Thinking.

Symbolic logic is the simplest form of logic and is a great time-saver in argumentation. It works on basic premises of common sense. It requires minor intuitive neuronal capacity for understanding. There is, after all, a scientific basis for something as basic as logic. 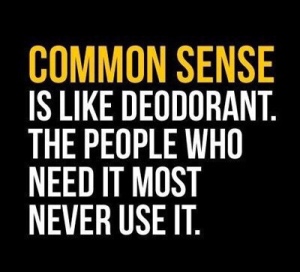 Basic logic, after all, is common sense.

Aristotle once said that

It is the mark of an educated mind to be able to entertain a thought without accepting it.

Logic and common sense escapes many of us today.

From government officials to the trolls who have nothing better to do in life but leave vile useless, brainless comments. Or make inutile decisions that are tantamount to making stupid a daily exercise in judgement.

It is obvious that these oppressors are simply trying to silence the noise. But not everyone lacks logic or common sense. Balls and courage may be lacking but hopefully we find enough moral values that isn’t ready to sell our souls and integrity to the devil.

We all know where this is leading to. Because in politics today, common sense and logic just don’t go together.

Let’s not even try to argue the obvious fact that those who still embrace the way the government is being run have run out of the remaining common sense and logic they have left. If you feel alluded to, take a bow.

Good people don’t need laws to tell them to act responsibly, and bad people will always find a way around the laws.