Used as a metaphor, a red flag is a problem requiring attention.

Red flags are used in various settings – from the work place to relationships.

Every relationship is a work in progress.  It’s always a golden rule that you try not to mix business with pleasure. As a general rule, it’s not good to have two people in a relationship in the same business.  Sometimes the personal stuff gets in the way

1. You justify their bad or wrong behaviour.

You know it’s wrong.  That the decision made was totally wrong.  Yet you rationalise that very wrong decision.  Psychology calls it ‘confirmation bias‘, where we discard all evidence that don’t align with our views and keep only those that do.  If you find yourself justifying someone’s meanness or traditional mindset, it’s time to pause and step back.

2. They don’t talk through issues.

It’s bad enough that you get the silent treatment.  But when people unwilling not to talk through issues – big or small – that’s a red flag. I mean, really.  We all don’t agree with each other some time.  How we handle those disagreements speak volumes of the relationship.  In any good relationship, walking away isn’t a solution to the problem.  Remember, it’s not about who wins in the argument.  It’s about how the problem is resolved.

3. Your boundaries are always being tested.

You’re pushed and pushed even when you can’t or shouldn’t.  It’s got to be their way or no way.  These are the people who will demand that you change because they insist they have it their way.  Even if you say NO.

4. They have a massive feeling of entitlement.

While every relationship isn’t a balanced one, we try to make it as equal as it gets.  When someone feels entitled to us doing more for them than what is fair in a relationship, that is a huge red flag.  It shows a clear lack of care.  There are people who think that the relationship revolves around them.  Only their overall happiness matters.  And this becomes a habitual pattern.  While one person gives and gives and gives, the other gives one back.  This is selfish and it’s like life is there only to meet their needs.

5. They constantly deny, criticise or dismiss you.

You know how it is when you’re not invited? That’s right. They don’t have to tell you up front that you’re not wanted in the company with his or her friends.  That’s because they’re ashamed of you.  And that you’d probably feel uncomfortable (or vice-versa).  When you get these feelings and find yourself in that position of “giving in” to keep the peace, look again.  Your self-esteem is diminishing.

You get that feeling that some things are not right – secrets, unexplained behaviours, unexpected reactions – you’re not wanted in their life.

A red flag is a warning signal. Multiple red flags tell you that it’s time to cut the ties. 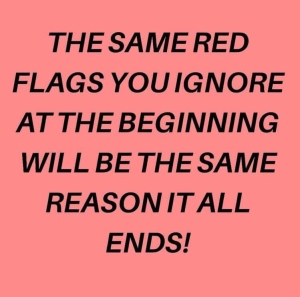 One thought on “Red flags”